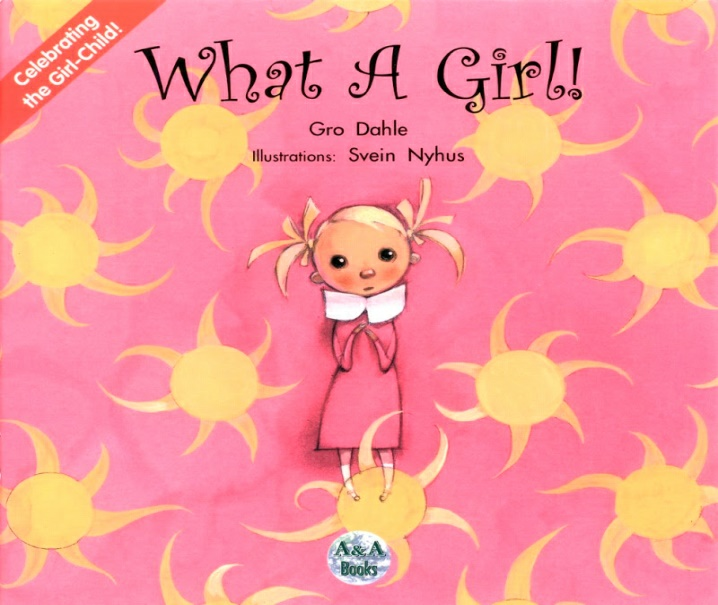 BOOK REVIEW: What A Girl!

Book: What A Girl!

What a Girl! is a Norwegian picture book that talks about gender stereotypes that children face as they grow up. It is a joyful 32 page ride with illustrations that catch your eye, written in a poetic manner.

Sheelu is the ‘perfect’ daughter one could ask for. She is obedient, clean, studious, courteous and quiet with an ever ready smile. She is so silent that people don’t realize she is present and one day she vanishes into the wall, emerging as a different person. The book can be enjoyed by all kinds of audience with the basic moral being children can’t and shouldn’t be raised based on their gender.

I liked the pattern in which the book has been written with the verbal and visual texts illustrated in a systematic manner. Illustrations have powerful impact as we usually imagine the story as we read. The cover page is what one encounters first and it depicts a girl in pink (a color that is used to represent feminine gender) cowering into her surroundings, which is also in a similar colour relating it to the fact that she is invisible to people as she behaves or rather has been taught to behave based on a set of societal protocols. As the story continues, a number of pictures can be seen in every page representing the disorder and the emptiness within Sheelu’s life that no one is able to understand and a grey stone persists till the end of the story which I believe is the heavy burden of gender stereotype that society has created.

As the story continues we come across the line “Because Sheelu is captured in the wall” and according to me the wall is the culture, the tradition, the beliefs, the rules, the family, the society and Sheelu is trapped in this conundrum of insanity, fighting to return as a person who’s able to raise her voice and do the things she likes to do. Her disappearance is noticed by her parents, teachers, friends who search and call out for her but all Sheelu can do is keep quiet though she is trying her best to shout out. The sentence “Sheelu has to sit there for hundreds of years” portrays how, numerous women have been trapped in such walls from times unknown and will continue to be trapped into this wall. But Sheelu denies being a part of this tradition and finally yells, and howls, and screams, and shouts so loud that she comes out of the wall in such disarray that everyone stares at her for she is messed up and dirty, pricking her nose, hungry and sleepy. This is not the Sheelu they knew but this is how kids are supposed to be and she has finally managed to speak up. I also feel the author showed that the change Sheelu underwent was because of her anger that had been suppressed for so long. She also realizes that other women have been stuck there when she sees the women of her family and her friends emerge from the wall.

At the end, it is seen that a boy is reaching out to the grey stone, illustrating that even boys/men are trapped in the wall and it is upto us to decide to come out of it. In a world where feminism represents only fighting for the betterment of women, we tend to forget that the opposite gender also faces similar issues of stereotypes. There are a hundred such walls over the world where thousands of people have been engulfed by such norms and are still fighting to come back. Make sure your child isn’t one of them. Colours, games and dresses evolved to bring joy to our life, not to represent gender!

I encourage parents read this book (available in Hindi and English on amazon.in). “Boys don’t cry”, “mard ko dard nahi hota”, “ladka hoke ghar me kyun pada rehta hai?”, “ladaki hoke dhup me kyun ghum rahi ho?”, “girls should know how to cook”  all of us have heard such comments, right?. Should not we change this?

Soujanya is Hyderabadi Kannadiga with a M.Sc. in Molecular Biology and Human Genetics from Manipal University. She currently lives in Hyderabad. Photography, Traveling, Painting are a few of her hobbies apart from reading novels, which she loves!